Jenkins and Spinnaker – A Comparison

Many organizations are using a combination of Jenkins and a tool like Ansible, Puppet, Chef, or Salt to automate their CI/CD pipelines but find themselves having to do many steps manually or using a series of scripts that can be hard to maintain. Many organizations manually move software from Development to Staging to Production with time-consuming manual processes. Spinnaker can fully automate these processes. Spinnaker can fully integrate with standard CI/CD tools such as Jenkins, SonarQube, and Artifactory but add a layer of automation to automate software deployments to Development, Staging, and Production, eliminating many manual steps. Spinnaker also automates the creation of Canary Analysis and Blue/Green environments. Many large organizations, including Netflix and Google, use Spinnaker. Spinnaker was developed at Netflix and Google to automate their massive volume of CI/CD pipelines, but both large and smaller organizations can benefit from Spinnaker’s automation.

Jenkins is currently the most popular Continuous Integration Tool. It has an extensive community with a large catalog of plugins available. However, it is not ideal for continuous delivery because of the following reasons: 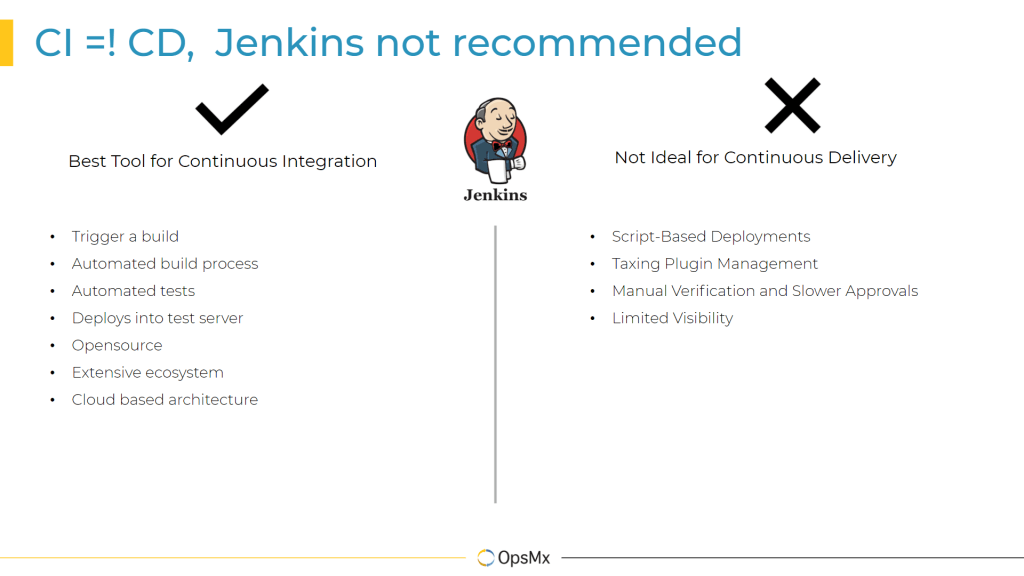 Spinnaker is a Continuous Deployment Tool. It provides the ability to manage continuous deployment pipelines with multiple deployment strategies and roll back easily to previous versions.

1. Spinnaker is not a build tool

Spinnaker was never intended to be a build tool. Spinnaker takes advantage of existing build tools like Jenkins to start jobs and monitor their progress and results. Spinnaker can make the deployment phase much more flexible. The Jenkins pipeline can extend beyond CI to CD, but this functionality was more of an afterthought. Jenkins was never designed for cloud deployment, so there is a need for external scripts to move the process forward.

Spinnaker has an all-in-one dashboard that allows you to monitor compilation, baking, deployment, and resource management for multiple cloud environments. Spinnaker combines all the capabilities of existing deployment and management tools into a cohesive, cloud-agnostic package. Jenkins needs extra help to take an application from package to production.

Jenkins lacks capabilities as a complete deployment tool, especially for the cloud. Spinnaker has a richer deployment model with a master dashboard and native support for major cloud providers. Spinnaker still relies on a build server and must integrate with tools like Jenkins. Spinnaker cannot replace Jenkins as a CI tool, but Spinnaker can make the deployment to the cloud process much more straightforward.

6. What about the new Jenkins capabilities?

Blue Ocean plugin has been added to Jenkins for more modern visual pipeline composition and continuous delivery tool, but it lacks the Spinnaker’s richness. Jenkins X has also been developed to support Kubernetes. Jenkins X provides developers a better way to automate their CI/CD process for Kubernetes than Jenkins alone but still lacks the Spinnaker deployment model’s capabilities. Spinnaker is also a proper multi-cloud deployment tool with the broadest support for deployment environments and continues to expand.

How to Automate Security and Compliance with OpsMx