Top challenges of delivering software at scale and their solution

Why do businesses need to scale software delivery?

Pandemic or not, businesses of all sizes today realize the importance of scaling their software delivery. It allows them to meet growing business needs, whereas a fast delivery cycle ‌enables a faster response to errors in production. This means that DevOps teams must be capable of delivering code changes and updates into the test and into production rapidly and on-demand. This, however, may not be possible for many organizations, even after adopting CI/CD tools. But why?

Businesses that receive exponential traffic occasionally, such as e-commerce sites or healthcare apps, should be capable of responding to user requests quickly and catering to necessary help on time. The businesses that fail to do so become increasingly vulnerable to security threats as they mature. Others may fail to reduce the time required to verify changes and shorten the time to market. These are just a few consequences of not being able to scale. Similarly, there can be several others.

Here are the top challenges that organizations face when trying to deliver software at scale. 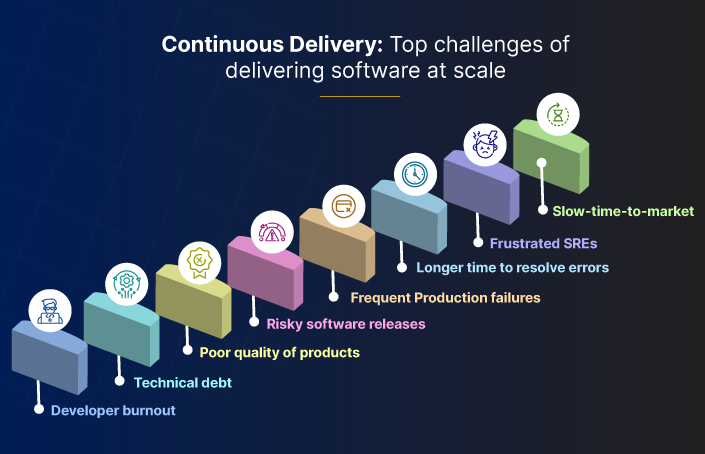 When large teams work in a distributed structure, they face more than a few challenges. Multiple teams equate to multiple interdependencies, which gives rise to complexities. The cumulative effect of all these factors together leads to inefficiency in software delivery.

Let’s go through each of these challenges that teams must overcome when trying to deliver software at scale.

Developers often experience burnout while working while they are working as a part of a system that is inefficient. For instance, if there is a critical bug in the production environment, and the release is scheduled on Monday, chances are that developers must take ownership, spend the weekend and troubleshoot the source of the problem before Monday. However, this process is extremely cumbersome and labor-intensive.

When trying to expedite the delivery of a release cycle, it is very common for engineering teams to resort to quick fix, off-the-shelf, and easy-to-implement solutions. This, unfortunately, can create a huge technical debt which can lead to unproductivity, as they must be addressed later. Technical debts are very common in case there is a lack of planning and structure within the team.

When teams fail to ensure compliance with best practices within the deployment pipeline, it may result in poor quality applications or microservices. Some of the root causes of poor quality software can be attributed to inadequate resources, lack of communication, unrealistic deadlines, or lack of domain expertise.

Software releases are often unpredictable and filled with risks. Most of the time, the release doesn’t go as per the plan. Even after a successful release, things may not work as expected. Some examples of these risks include releasing poor quality software, increased cost of production, inaccurate estimations of deadlines, and many more. If not addressed properly, these can lead to an increased time of software release.

Production failure can wreak havoc on organizations. For example, in January 2018, a false alarm was sent out through the Hawaii Emergency Management Agency’s alert origination software about a missile strike in Hawaii due to a human error. This spread confusion and terror among the citizens. There can be configuration and application issues and so on. Thus, it is imperative that the issues related to production are resolved during the run time itself.

As teams are forced to release with velocity, the releases have become prone to errors. However, when delivery teams try to monitor the code flow manually, it results in increased turnaround time. Hence, the lack of a system through which teams can investigate and troubleshoot problems can lead to a longer downtime.

When organizations fail to maintain compliance during the application deployment scenario, it can lead the product to a slower time to market. Shortening the time to market can have multiple positive impacts. First, it can provide a competitive advantage to the organization. Second, it can reduce R&D costs. Third, it improves customer satisfaction. And lastly, it helps grow the revenue.

Solution - How OpsMx ISD enables you to securely and quickly deploy

OpsMx ISD is an ML-powered continuous delivery module that takes care of all the challenges discussed above and enables DevOps to increase the release velocity without the risks involved. It consists of two modules-

Let us learn about each of these in detail.

How does the ISD Solution work?

ISD by OpsMx is an application layer built on top of Spinnaker that provides value-added services such as verification gates, approval gates, and policy enforcement. It integrates easily with over 40+ tools such as GitHub, Jenkins, DockerHub, and so on. Additionally, it supports multi-cloud deployments. The orchestration module of ISD is built on the foundation of Spinnaker.

It supports communication with tools such as Slack, the Google communication suite, git-based repositories like GitHub and Bit-Bucket, automation tools like Jenkins, ticketing systems like Jira and so many others. By integrating these tools through a single platform, ISD improves visibility for the entire team and allows each individual member to know the health of their application.

Thus, ISD enables DevOps to build flexible pipelines and empowers users to add a new tool, cluster, or pipeline. Moreover, the easily scalable nature of ISD makes it easy for organizations to meet their requirements. 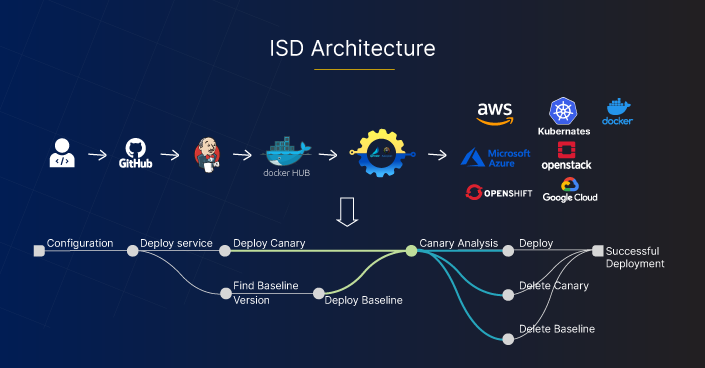 There are multiple operations for implementing ISD as a continuous delivery tool.

The ISD enables users to automate the delivery workflow by leveraging easy to create pipelines. This not only simplifies the delivery configuration for the users but also allows them to manage versioning and automated updates of pipeline changes. Similarly, users can manage 1000s of pipelines and enforce policies within the pipeline. Above all, they get real-time visibility and diagnostics during pipeline execution.

With ISD, DevOps get faster approvals of the delivery pipelines. By enabling teams to get instant feedback, developers can review and resolve the issues in real-time.

ISD provides developers with access to key insights into their application health data such as the fastest pipeline, the slowest pipeline, or errors encountered. This, in turn, boosts their confidence to make decisions based on the gathered data.

Developers can minimize the risk scenario with ISD as it automatically monitors the risk of every software change before releasing it to production. Additionally, by enforcing the security best practices in all deployment stages and securing the release pipelines through user authentication, teams can almost eliminate risks.

ISD provides real-time visibility into the performance of all pipelines, over time, and across all applications. Thus, compliance managers and auditors can easily identify who, what, when, where, and how for the pipelines and applications with audit reports.

Anushua is a Sr. Content Marketing Specialist at OpsMx with over 8 years of experience. Her background is in B2B SaaS content marketing. When not at work, she likes cooking for her family, spending time with her pet, propagating plants, working out at the gym, and eating carbs.