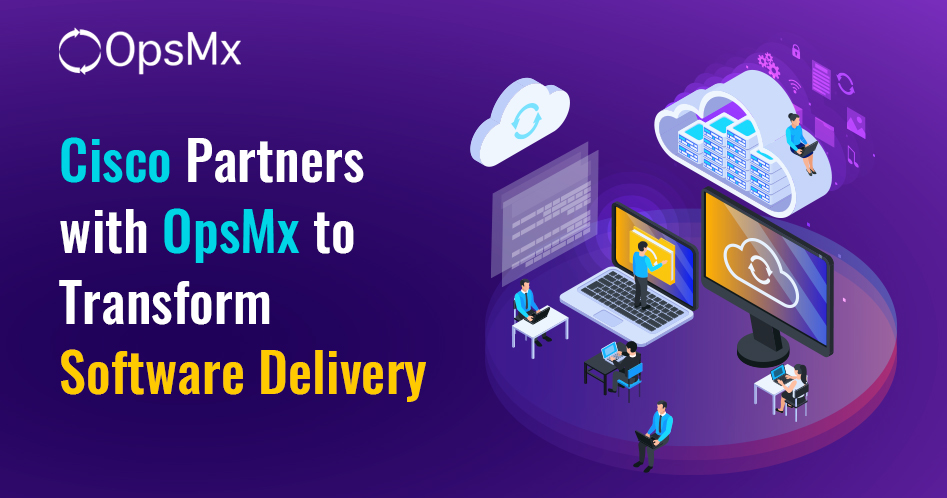 Cisco Systems is the worldwide leader in networking and IT technologies, dedicated to helping people connect, communicate, and collaborate. Cisco’s IT manages one of the industry’s largest and most diverse software development organizations.

Challenge: Transform Software Delivery to Speed the Shift to the Cloud

This is a story of a large transformation – transforming the way a large organization delivers software in order to respond better to their customers.

In 2018, Cisco launched an ambitious initiative to transform their IT from a traditional “on-prem first” model to a modern, agile, cloud-native architecture. The goals were to improve their ability to react quickly to market demands and to further their competitive advantage.

Achieving speed in software delivery was critical for Cisco to be able to build and enhance cloud-native applications quickly and to meet their innovation goals. The previous software delivery practices were not able to keep up with the scale, speed, or flexibility requirements of the new model.

“Spinnaker is a powerful solution, and OpsMx makes it simple for us to use.”

The Cisco environment includes Kubernetes, Red Hat OpenShift on-prem and in AWS and GCP. They also have more than 13 major platforms, such as Workday, Snowflake, Oracle, and Teradata, as well as extensive virtual machine-based systems. They support monolith, microservices, and complex hybrid applications, and they have extensive security and compliance requirements.

Cisco conducted a thorough evaluation of the potential continuous delivery solutions, both open-source, and proprietary, and even considered extending Jenkins into the “delivery” segment of the SDLC. They enthusiastically chose Spinnaker as their CD tool.

Cisco chose to work with OpsMx and OpsMx Enterprise for Spinnaker (OES) due to its:

Cisco chose a combination of simple and complex applications for initial onboarding. The simpler initial applications assured initial success as well as gaining important experience. At the same time, four essential business applications were part of the initial mix to ensure that Spinnaker would work across the board.

In less than 30 days, Cisco transformed the delivery process for ten initial applications and made great progress on the four business-critical apps.

“We started to realize the value of faster deployments within 30 days of starting the project.”

Phase 2 – Expand to a broader application set in production

Once the first applications were live, Cisco moved into the “From Pilot to Production” phase of its rollout of OpsMx Enterprise for Spinnaker, with the number of applications increasing to about 100, and the number of developers served by Spinnaker grew to more than 1000.

During this phase, Cisco used Spinnaker to deploy Red Hat OpenShift on-prem applications in addition to the cloud. Although open-source Spinnaker does not support OpenShift, OpsMx Enterprise for Spinnaker includes custom stages that support Red Hat. Cisco also broadened the types of applications being deployed, including applications that rely on Teradata, Snowflake, and others.

During this phase, Cisco used OpsMx to create a High Availability (HA) architecture for the Spinnaker deployment itself, including full monitoring using Prometheus and other systems. Cisco now has more than 15 separate Spinnaker instances that handle deployment across dev, test, staging, and production in all of Cisco’s major geographies.

Phase 3 – Standardize on Spinnaker across all apps and services

Spinnaker is known for being powerful. It also has a reputation among companies that are not OpsMx clients for being complex and difficult to learn. To move from 100 to 1000 applications, the application onboarding process needed to be simple, as developers did not want to become Spinnaker experts to enjoy the benefits of automated deployments.

Cisco has now scaled to thousands of pipelines and uses simplified, self-service onboarding. In more than 80% of the cases, Cisco teams are able to onboard their applications with no assistance, speeding the process and eliminating effort for the central IT team.

For Cisco’s database-centric applications, Cisco deploys schema changes simultaneously with application updates using the OpsMx deep integration with Teradata. This means that either both updates succeed or both are rolled back, which reduces the risk of production errors. This is important for systems that use Teradata, Snowflake, and others.

“We have found OpsMx to be a great partner in transforming our continuous delivery.”

In order to ensure that Cisco achieves their goals and realizes all the potential value from Spinnaker, OpsMx provides “no excuses” support to Cisco around-the-clock, round-the-world basis. Of course, this support includes basic break-fix for Spinnaker, but OpsMx goes much further, providing best practice delivery, integration and tool stack troubleshooting, operational monitoring, capacity planning, and training.

Cisco has achieved all four goals that they set out at the beginning of the transformation:

In addition to the millions of dollars that Cisco has saved working with Spinnaker and OpsMx, Cisco feels confident that they will be able to extend the benefits of faster innovation to all Cisco teams.

Pete Chargin leads Marketing for OpsMx. In his role, Pete is responsible for ensuring the best possible communication between OpsMx and the CD community. Prior to OpsMx, Pete has worked with members of the DevOps community for the past twenty years, including leadership roles at VMware, BigPanda, and Delphix. He started his career as a software engineer, and still focuses on solving the challenges that organizations face as they modernize their application stacks and move to the cloud.

How to Enable Prometheus Monitoring for Kubernetes Cluster