Spinnaker is a continuous delivery platform that is pioneering the ability to release software faster. It is allowing thousands of enterprises to achieve release velocity never seen before.  The key to increasing the velocity is to have the ability to determine with confidence that the new release can be promoted across different testing stages and eventually to production through Canary, Red/Black (aka blue-green) or Rolling update release strategies.

Leading enterprises (like Netflix which deploys more than 4000 updates a day), has a proprietary decision engine to allow them to promote builds to production with confidence.  However, most enterprises still are dependent on manual analysis and judgments to promote builds.

Manual judgment is error-prone as decisions are based on incomplete analysis and are time-consuming as the analysis are laborious.  Bad builds in production introduce significant risks due to business disruptions and brand damage.

OpsMx Enterprise for Spinnaker is a real-time analytics platform for CI/CD pipelines that is designed to aid manual decision in promoting build across test and deployment to production. The OpsMx solution helps in reduce error and diagnostics time through complete, consistent real-time automated analysis for Spinnaker.

Before we look at challenge and risks, let us review some of the enterprise practices of promoting builds to production: 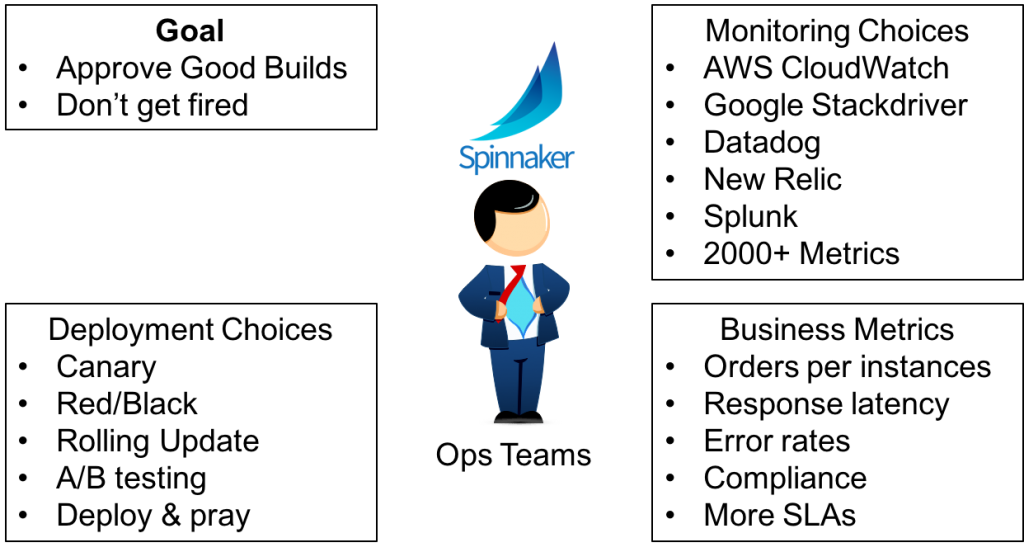 The core philosophy of the above strategies is to reduce the impact of bad deployments – How soon can one find out if the new service update is bad and how soon can one roll-back without causing too much business disruption. However, Ops teams face significant challenges to reliable validate builds as shown in Figure 1.

The manual judgment of new releases to be deployed into production introduces tremendous business risk. The manual analysis is inherently incomplete due to the complexity of the services, their interactions, changes to this build compared to the previous build and the sheer volume of metrics collected for any build during various pipeline stages.  The incomplete analysis can be viewed in 3 specific dimensions as shown in Figure 2 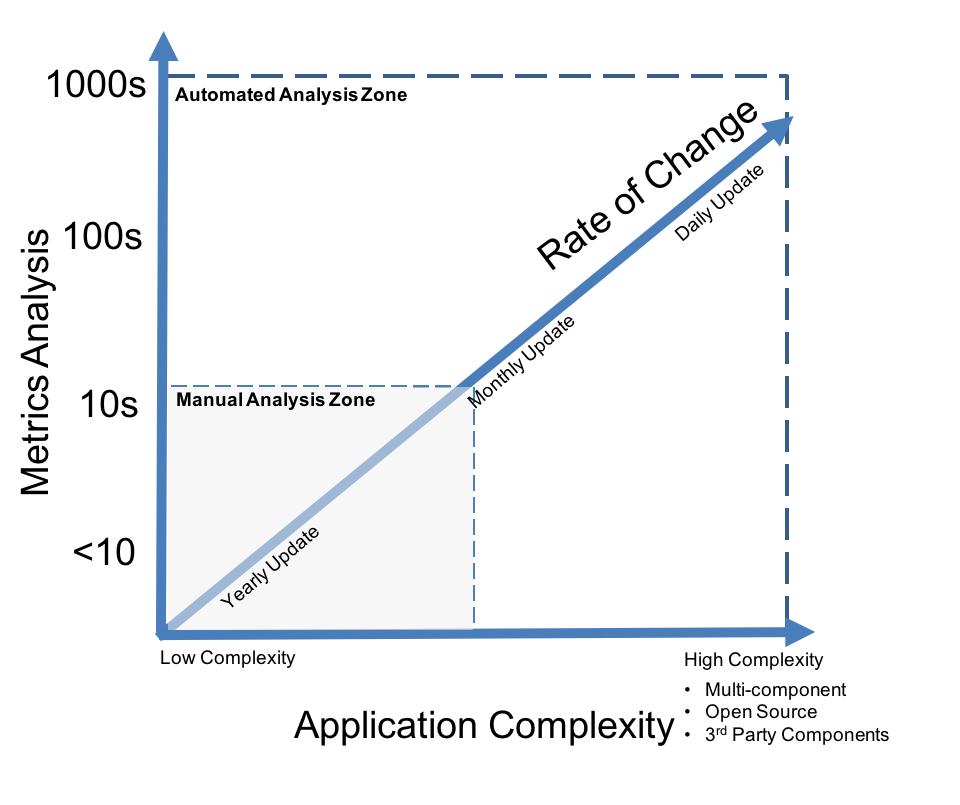 Figure 2; Manual Analysis is Not Scalable and is Incomplete

Such an incomplete analysis leads to the following issues with the release validations:

The above issues could cause significant business loss. A recent example of an improperly approved new version of software with bugs resulted in the grounding of flights of American Airlines for 6 hours or the case of Starbucks losing millions in revenue.  There is a need for a more reliable data-driven approach to ensure consistency and fewer errors to improve safety and ease of diagnostics for Spinnaker minimizing business risk of new builds.

OpsMx Enterprise for Spinnaker is a CI/CD analytic platform that provides DevOps engineers an intelligent automated real-time actionable risk assessment to make a reliable judgment of a new release for production deployment. OpsMx compares the new release of the service to the baseline or production release for new validation.  OpsMx leverages machine learning and Artificial Intelligence (AI) techniques to analyze 1000’s of metrics and perform in-depth analysis of architectural regressions, performance, scalability and security violations of new releases in a scalable way for enterprises. OpsMx seamlessly integrates with Spinnaker through existing Canary analysis service APIs. OpsMx address three prevalent use cases with Spinnaker:

Automated Canary Analysis is the most well-known use case for enterprises who are interested in canary deployment to reduce risk. If the Canary deployment analysis fails (Figure 3), the pipeline execution terminates for further diagnostics of the release. 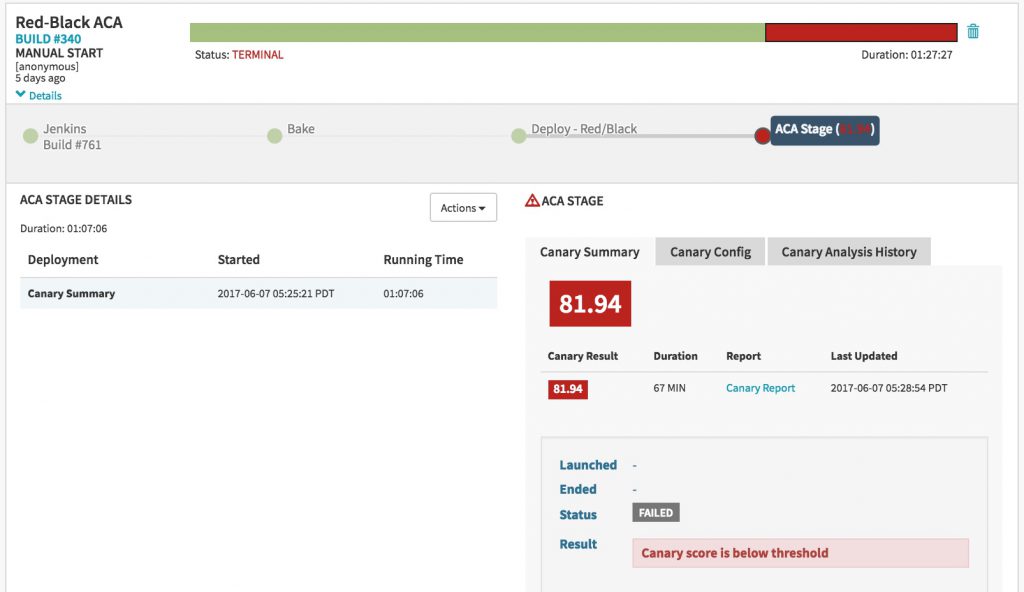 Red/Black is the most traditional deployment option in Spinnaker. In this case, OpsMx compares the new release with the production or baseline release. If the Red/Black deployment analysis fails (Figure 4), then release is roll backed either manually or in an automated fashion. 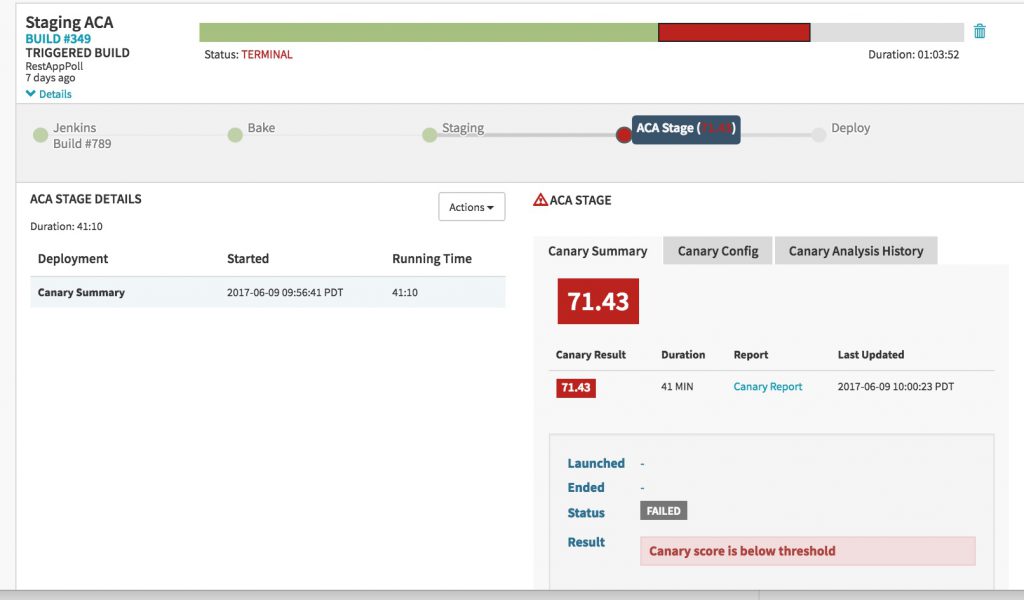 In many cases, it is safest to avoid exposing the bad release in production even for a few hours. Performing the analysis in the staging environment is preferred. If the release passes then release is promoted to production via Red/Black deployment. If it fails in staging (Figure 5),   bad deployment is averted without any production traffic exposure. OpsMx provide detailed diagnostics for each of the analyzed stages to further diagnose the issues in the release as shown in Figure 6 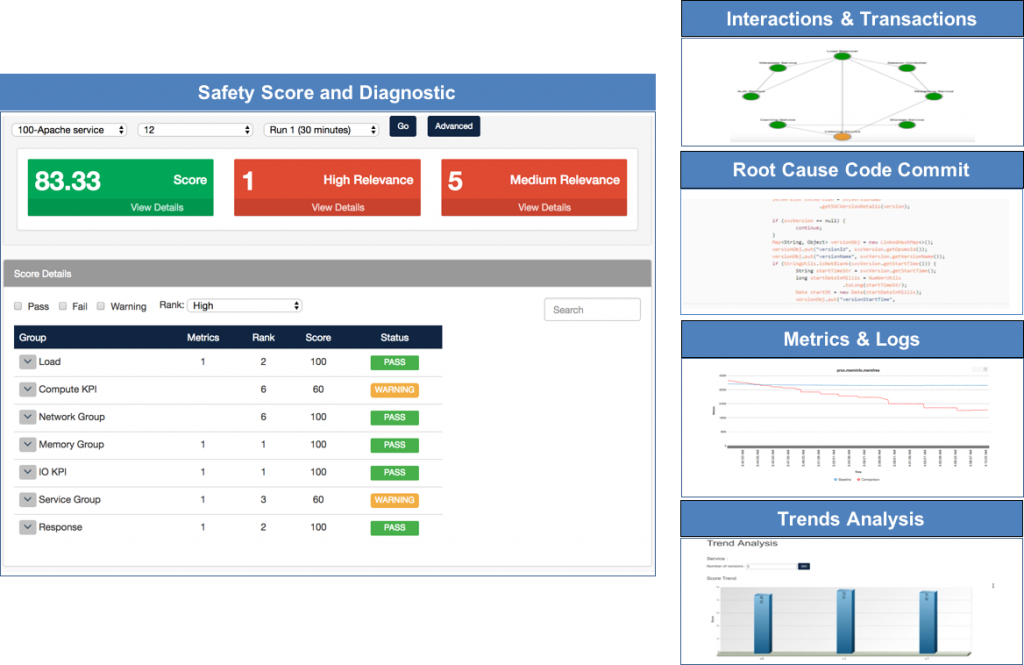 Validate and approve builds with low risk to production: With the OpsMx build risk assessment report for a new version of the service, Ops team have an accurate automated report on safety and readiness of the build.  If the safety score is above the pass threshold, the Ops team can promote the build for further deployment.  OpsMx compares the current build to production baseline characteristics with the score accurately reflecting the risks of the new build. OpsMx can be configured to do real-time canary or Red/Black or staging/testing analysis and provide safety scores.

The OpsMx provides an effective data-driven solution to automate real-time judgment of new software releases by Ops teams using Spinnaker in an enterprise.  The OpsMx solution integrates with Spinnaker for analysis during Canary, Red/Black or Staging/Test deployment stages. With the OpsMx solution, Ops team can reliably validate and approve builds with low risk for deployment, scale to validate multiple deployments a day, reduce the time for analysis and debugging issues and reduce human errors in release decisions. Overall, OpsMx solution lowers business risk due to bad deployments and makes release judgment safer. For more information about the OpsMx solution for Spinnaker or free trial, fill out the below form or email us at [email protected].

Cisco Goes From Zero to 1000+ Applications on Spinnaker

Migrating data store in Spinnaker from Redis to MySQL

How to Deploy to RedHat OpenShift with Spinnaker